Instant gourmet popcorn, now in a 10 rupee pack. The new flavors of 4700bc popcorn pop perfectly and are mildly flavored.

4700 BC Popcorn offers large-sized gourmet popcorns you can pop at home. Though the flavors were too subtle for us, we loved that no piece was raw or burnt.

Popcorn and movie marathons are a match made in heaven that no one messes with. The heavenly aroma of freshly made popcorn fills up the entire house and lingers for a while, reminding you of a movie theatre. Thanks to the many instant popcorn brands in India, movie watching experience at home can be achieved in under 5 minutes. 4700 BC popcorn is India’s first gourmet popcorn brand that has introduced a range of flavored instant popcorn packets. For a fair review, we chose four flavors of 4700 BC instant popcorn that we popped at the Mishry HQ. The flavor intensity, quality of corn kernels, cooking time, and other such details are discussed in this gourmet popcorn review. 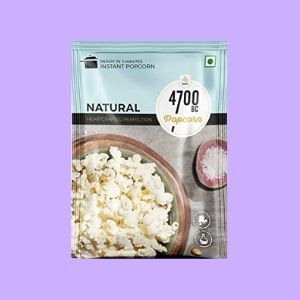 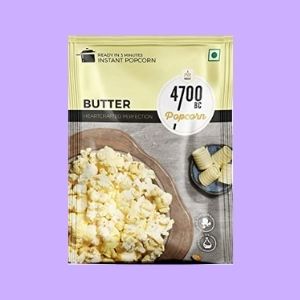 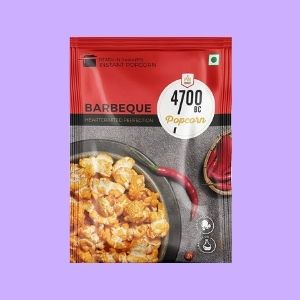 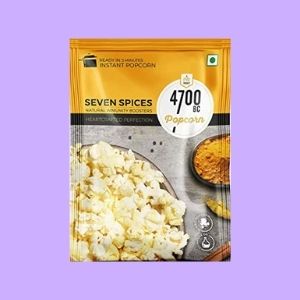 The 4700 BC popcorn flavors are priced at Rs 10/-. Each pack contains 30 grams of uncooked corn kernels.

(22537)
₹1,750.00 (₹175.00 / 100 g) ₹783.00 (₹78.30 / 100 g)
Happilo brings handpicked 100% Real Nuts for that crunchy, authentic and delicious taste. Quality guaranteed, it comes in a resealable bag to retain its crunch and freshness. Add a few in your diet and stay energized all day long. Surely natural, the... read more
(as of July 18, 2022 06:00 GMT +05:30 - More infoProduct prices and availability are accurate as of the date/time indicated and are subject to change. Any price and availability information displayed on [relevant Amazon Site(s), as applicable] at the time of purchase will apply to the purchase of this product.)

(6722)
₹140.00
Delight in every bite From the house of Unibic
(as of July 18, 2022 06:00 GMT +05:30 - More infoProduct prices and availability are accurate as of the date/time indicated and are subject to change. Any price and availability information displayed on [relevant Amazon Site(s), as applicable] at the time of purchase will apply to the purchase of this product.)

(6790)
₹60.00 (₹47.62 / 100 g) ₹44.00 (₹34.92 / 100 g)
Experience new exciting Cadbury chocolate choc layered cake that is sure to amaze you Indulge in the delightfully light sponge cake enrobed in a chocolatey coating outside and layered with chocolatey cream inside Perfect as an indulgent "me time" Tre... read more
(as of July 18, 2022 06:00 GMT +05:30 - More infoProduct prices and availability are accurate as of the date/time indicated and are subject to change. Any price and availability information displayed on [relevant Amazon Site(s), as applicable] at the time of purchase will apply to the purchase of this product.)

(8749)
₹235.00 (₹23.50 / 100 g) ₹230.00 (₹23.00 / 100 g)
All vedaka raw peanuts are hygienically packed and undergo stringent and rigorous laboratory tests to meet fssai food safety norms Peanuts are sorted to deliver consistency in quality No artificial flavours. No preservatives Packaging designed to ret... read more
(as of July 18, 2022 06:00 GMT +05:30 - More infoProduct prices and availability are accurate as of the date/time indicated and are subject to change. Any price and availability information displayed on [relevant Amazon Site(s), as applicable] at the time of purchase will apply to the purchase of this product.)

(10397)
Bring back the nostalgia of those mischievous moments of your life with these heart-shaped sweet poppable biscuits Crispiness overloaded with the sweet sugar crystals sprinkled all over releasing dense, aromatic flavours in every bite Pop one of thes... read more
(as of July 18, 2022 06:00 GMT +05:30 - More infoProduct prices and availability are accurate as of the date/time indicated and are subject to change. Any price and availability information displayed on [relevant Amazon Site(s), as applicable] at the time of purchase will apply to the purchase of this product.)

4700 BC Popcorn pops perfectly but is very mildly flavored.

Quick Review Of 4700 BC Popcorn – Natural

Taste Test – The corn kernels cooked rather quickly, and all the kernels popped perfectly. We were delighted to see zero uncooked kernels or burnt pieces. This instant popcorn had a larger than usual size. When we tasted the 4700 BC Instant Popcorn (Natural) we noticed they were adequately salted. The saltiness of the popcorn is not overpowering at all. All in all, we got no complaints here.

Quick Review Of 4700 BC Popcorn – Butter

Taste Test – Like the natural ones, there were no burnt pieces of popcorn in this instant popcorn packet too. The butteriness you expect out of popcorn labeled as ‘Butter’ flavor, we were expecting a rich buttery tub of popcorn. Sadly, the butter content in this 4700 BC popcorn was very mild. Many other instant popcorn brands deliver fairly well on the butter promise, and we expected something at par with those, if not the movie theatre kind. The 4700 BC Butter Popcorn was far from that. We missed the rich, buttery popcorn.

Quick Review Of 4700 BC Popcorn – Barbeque

Taste Test – The 4700 BC popcorn we tried next was the barbeque flavor. Typically, BBQ flavors are characterized with a mix of sweet and spicy flavors that hit you one after the other. In this case, though the corn kernels popped perfectly, the BBQ flavor disappointed us. This gourmet popcorn lacked the punch of flavor we were looking for. The flavors were too mild, and something bolder would have made the cut.

Taste Test – Before we begin, let us tell you a little more about the seven spice blend. The seven spice is also known as the Lebanese 7 spice mix which is a mix of cinnamon, nutmeg, ginger, fenugreek, allspice, pepper, and cloves. As with garam masala, the spice combination here too, can vary depending on personal choice. This pack of 4700 BC instant popcorn includes turmeric, black pepper, cinnamon, cumin, ginger, fenugreek, and cardamom as mentioned on the pack. Naturally, we assumed this 4700 BC popcorn to be loaded with a rich masala flavor. However, there was no distinct taste of these spices, nor did they have the heat that spices usually add to a dish. At the end of the bite, we sensed a very mild spicy flavor.

4700 BC popcorn is a brand associated with gourmet popcorn. This instant popcorn packet is priced at Rs 10/-. Though the texture, size, and appearance had us pleasantly surprised, the flavors were not as bold as we would have liked them to be. In the similar price range, there are better contenders in the market that offer bolder and better flavors. However, the natural flavor variant of 4700 BC popcorn is what we liked the most. The salt levels were perfect! All kernels were cooked well and had a crunch that we expect out of a well-made bowl of popcorn. A single pack of popcorn is meant to cater to a single person. 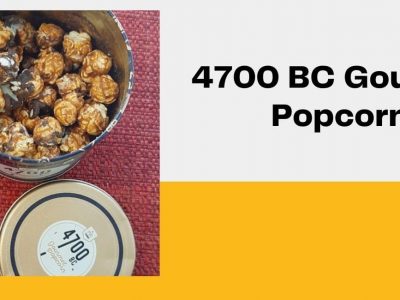 4700 BC Gourmet Popcorn Review: These Chocolate Popcorn Are YUM! 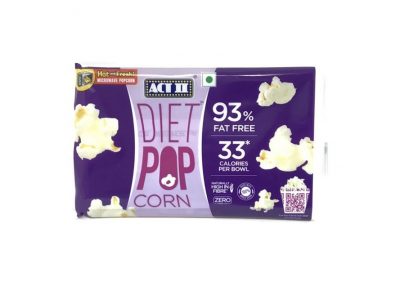 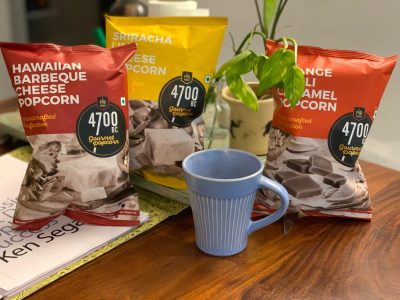 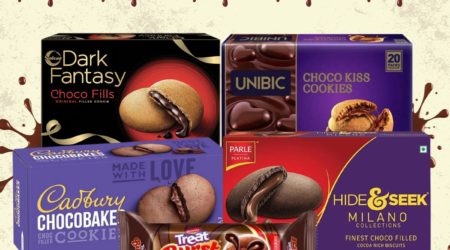 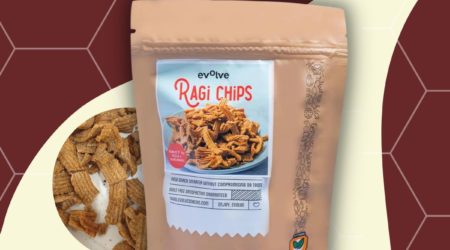 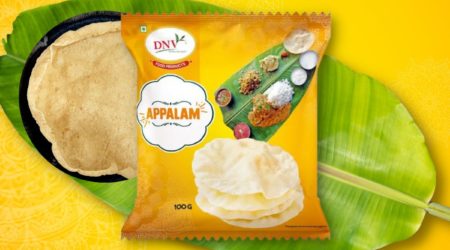 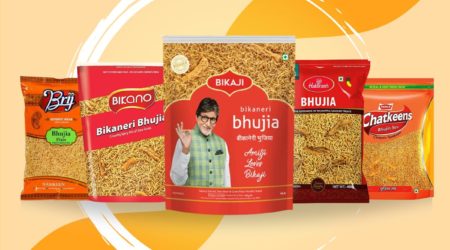 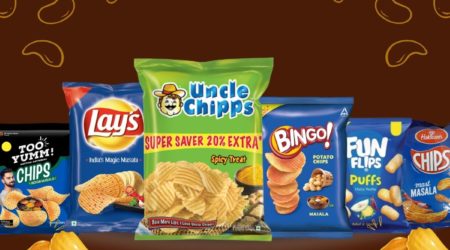 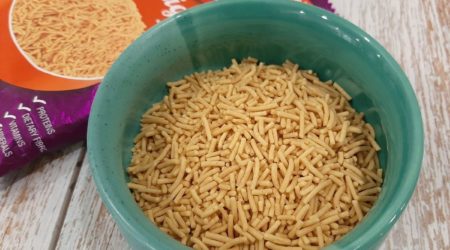 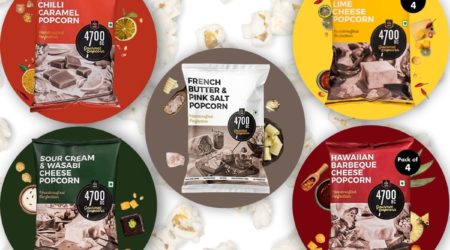 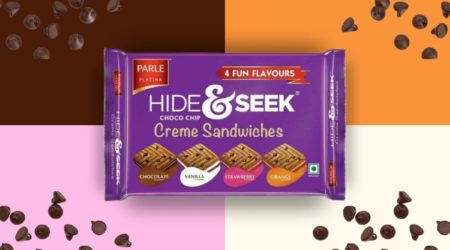 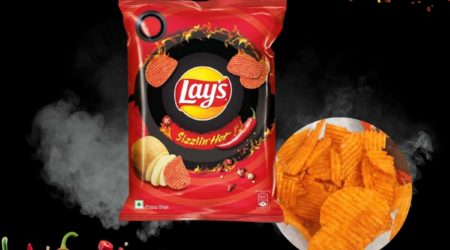 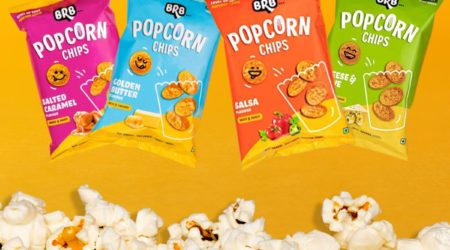 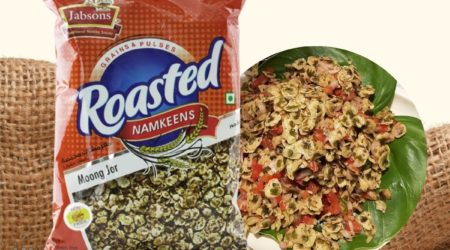