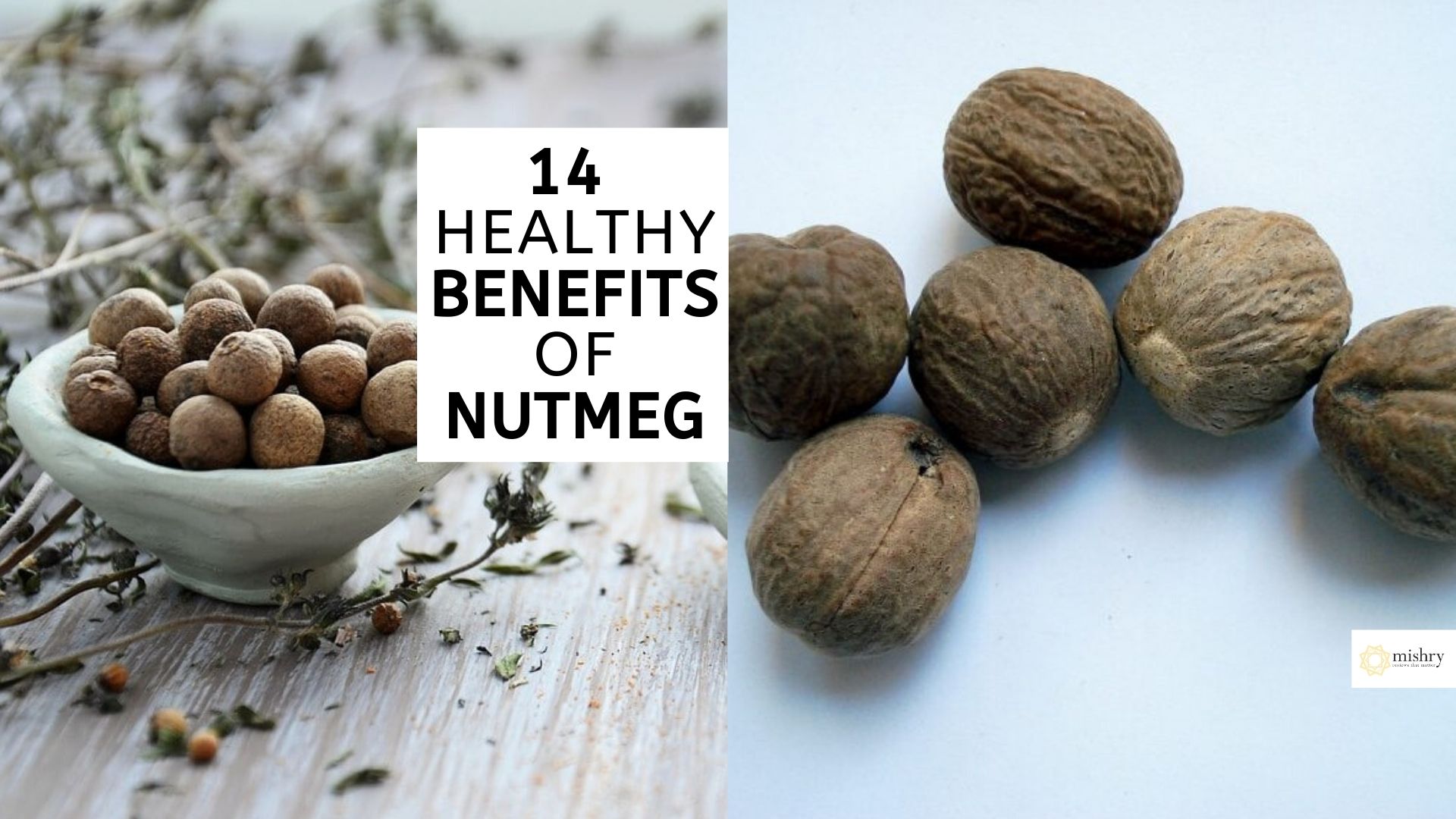 Nutmeg is a common spice found in every kitchen. Its distinctive taste and aromatic flavor make it an ideal spice. Nutmeg is loaded with antioxidants which have many health benefits. You must store ground nutmeg in air-tight containers and place them away from heat, moisture, and light.

Nutmeg is simply a seed or the ground spice of the species of genus Myristica. It is also found in the form of a whole seed but it is sold in the form of ground spice. Nutmeg is used in the preparation of a number of dishes because of its sweet aromatic nature. It is found in Malaysia, The Caribbean and in South India.

The tree of this species is the only tree that can grow 2 spices on it simultaneously. The other spice that grows on this tree is mace. Nutmeg is beneficial to health in many ways. It has a slightly nutty and warm flavor and is added to desserts, curries, tea, etc.

Nutmeg has some powerful compounds which are responsible for the prevention of certain diseases and improve your overall health. Nutmeg has all the essential vitamins, organic compounds, and minerals. It has crucial components like dietary fiber, manganese, vitamin B6, thiamine, folate, magnesium, and copper.

Want a list of Indian spices to add to your diet? Here are 19 essential spices used in Indian cooking.

Nutritional Value Of Nutmeg (per 100gm)

Nutmeg has a number of benefits for health. Here is a list of all the benefits provided by nutmeg:

Nutmeg oil may be effective in managing seizures. Nutmeg oil works against grand mal and partial seizures as well. This was shown in a study by Wahab A in 2009, which was carried out on animals.

Nutmeg is known to give relief to those suffering from diarrhea. It has carminative properties and promotes digestion. It can be consumed along with cold water and ginger. Nutmeg has anti-diarrheal properties was shown in a study published in Methods And Findings In Experimental And Clinical Pharmacology.

Nutmeg shows hypolipidemic effects, which means that consumption of nutmeg results in reduced levels of bad cholesterol. There was a study held in albino rabbits which showed that nutmeg reduces bad cholesterol.

For a long time, nutmeg has been used in traditional and herbal medicines to improve the health and appearance of the skin. It can be applied on skin directly by making a paste with water or honey. In a research held in 2016, nutmeg was able to treat certain skin infections.

In another research held by KE Lee and his colleagues, it is found that nutmeg has bioactive compounds like macelignan which ensure there is no premature aging, caused by exposure to ultraviolet rays. Nutmeg oil is also useful for the enrichment of skin.

Nutmeg is believed to protect you against cancer cells. It is found in a study published in chemico-biological interactions, nutmeg has chemopreventive properties, which means it can prevent the growth of cancer cells in the body.

Nutmeg is used in Ayurveda as a medicine for depression. It has fewer side effects than any allopathic medicines and it is often used as a mood enhancer.

Nutmeg has multiple medicinal benefits which also include a treatment of liver disorders. Nutmeg contains myrislignan, which relieves injuries of the liver. Nutmeg also reduces hepatic inflammation and free radical activity in the liver.

Nutmeg has antibacterial properties and can also forbid the activities of certain bacteria such as porphyromonas gingivalis that can lead to tooth decay. There is methanol extract in nutmeg which has anti cariogenic properties which again prevents tooth decay and other dental issues. Nutmeg can also prevent the occurrence of a cavity as it has the antibacterial agent known as macelignan.

Nutmeg is believed to have neuroprotective properties that improve the health of the brain. It is believed that oil in nutmeg is responsible for delay in the onset of neurodegenerative diseases such as Alzheimer’s, Parkinson’s disease and Huntington’s disease.

Nutmeg has been used as a home remedy for insomnia for a long time. Drinking a pinch of nutmeg powder in milk before going to bed, helps in sleeping better.

Nutmeg is believed to be a great solution for people who have pains in the body constantly due to cancer, inflammatory diseases, diabetes, etc. Nutmeg oil gives relief from chronic pain. Nutmeg oil can also lighten swelling in joints and mechanical allodynia, which is a chronic pain caused by simply touching the affected area.

Not only nutmeg has medicinal properties, but it can also be used in various dishes to add flavor. It can also be sprinkled on starchy vegetables and that creates an interesting flavor. You can even add nutmeg to smoothies, tea, etc.

Some Uses Of Nutmeg

Nutmeg has a number of uses. Following are some uses of nutmeg:

How To Consume Nutmeg?

Nutmeg can be consumed in a variety of ways, such as

Purchasing The Best Nutmeg & How To Store Nutmeg

Get a warm and zesty flavor with these best ginger alternatives.

Side Effects Of Consuming Nutmeg

Nutmeg is a healthy spice, and it hardly causes any harm if consumed in the right quantity. If it is consumed excessively, it can cause the following:

How Much Nutmeg Can You Consume?

Consumption of nutmeg depends on the person’s age, health, and other conditions. There are not enough studies to provide the ideal dose of nutmeg. You must remember, that natural spices are healthy and beneficial as long as they are consumed in the right amount. Keep consuming nutmeg in limited quantities and you will see how it provides all the health benefits.

After a long list of nutmeg benefits, here we have answered a few FAQs about when to eat nutmeg and what are its disadvantages.

1. When should you eat nutmeg?

A pinch of nutmeg added to baked items or desserts is enough to do wonders for your health.

2. What are the benefits of nutmeg to the body?

Nutmeg has several benefits for health. When consumed in a mannered quantity, it can reduce bad cholesterol and regulate blood pressure. Besides this, nutmeg is great for skin and oral health.

3. What are the disadvantages of nutmeg?

If nutmeg is consumed excessively, it can cause hallucinations and loss of muscle coordination as it has myristicin and safrole. Myristicin has psychoactive properties which can cause toxic effects on the body.

Nutmeg toxicity can result in nausea, rapid heartbeat, disorientation, vomiting, and agitation. If it is consumed with other drugs, it may even be fatal in rare cases.

Myristicin compound, present in nutmeg, has psychoactive properties which can cause toxic effects on the body. However, consumption of small amounts is harmless.

5. Is nutmeg good for sleep?

Intake of a pinch of nutmeg in warm milk before bed is helpful as it has a calming effect which benefits in getting a good night’s sleep.

In conclusion, nutmeg is a common spice found in every kitchen. Its distinctive taste and aromatic flavor make it an ideal spice. Nutmeg is loaded with antioxidants which have many health benefits. But nutmeg is beneficial, only if it is consumed adequately.