Side-Effects Of Sesame Seeds For Your Body- Mishry 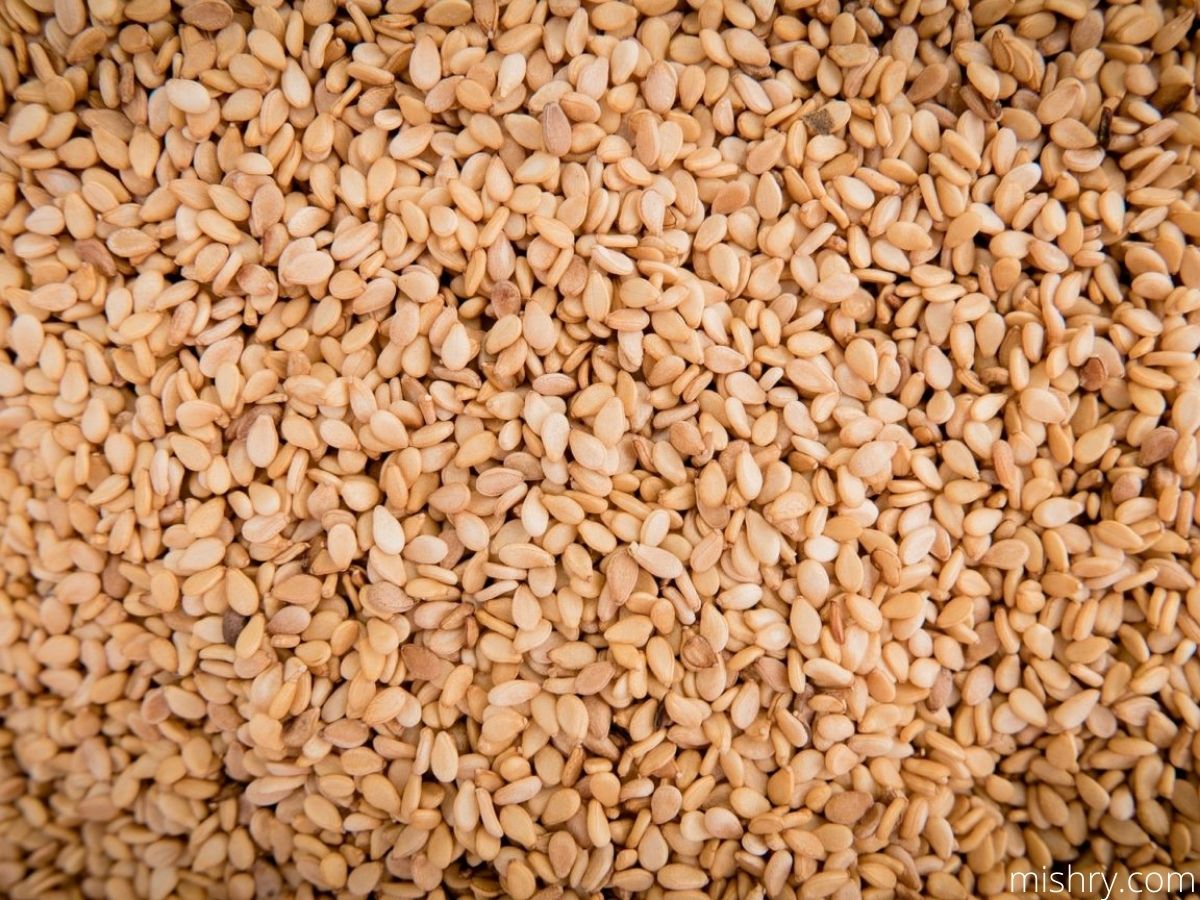 Side-Effects Of Sesame Seeds That You Need To Know

While eating any item, it is important that you be careful with the limit of your intake, and sesame seeds are no exception to this rule. Consumption of sesame seeds, if unregulated, can lead to some adverse health effects.

One of the most important aspects of a healthy diet is the moderation of food items consumed, and sesame seeds are no exception. Though the benefits of sesame seeds are many, its side effects must also be considered for those planning to make this a regular part of their diet.

Out of sesame oil? Try these Substitutes For Sesame Oil.

Side effects of sesame seeds

Here are some of the side effects of sesame seeds one can suffer if consumed in excess or if allergic to it.

Sesame is credited as a beneficial food item for maintaining the blood’s glucose levels. This is achieved due to the fiber and protein content present in sesame seeds that help in the slowing down of digestion, which further decreases the insulin resistivity of your body, thus allowing the pancreas to secrete enough insulin to break down the sugar content in your meal.

However, if not taken in a limited fashion, sesame seeds can result lead to the lowering of your blood glucose level below its normal state.

Sesame is a well-known natural remedy for high blood pressure. The minerals present in sesame seeds help reduce the ill-effects of excessive salt in your bloodstream. When the intake of salt exceeds in your blood, it prevents water from escaping your cells, thus increasing the blood pressure.

Conversely, too much sesame can also lead to lowering the blood pressure below healthy limits.

Appendicitis is a disease in which the appendix starts to inflate and causes severe pain. It is mostly caused by the indigestible materials in your meal. Fibers, which are present in sesame seeds, are materials that are indigestible and add up to the bulk of stool. The intake of fibers is necessary for weight loss, prevention of over-eating, and slowing down of our digestion. However, if consumed in high quantity, fibers can form a layer over the appendix which can cause bloating and pain.

Anaphylaxis or Sesame allergy is also one of the most common side-effects that appear due to the consumption of sesame seeds. Various symptoms such as nausea, difficulty to breath, and shock, are common.

Since sesame allergy is a commonly reported type of allergy, it is advised to consult your doctor before including sesame based products in your daily diet.

Since it has been mentioned, sesame seeds are a good source of dietary fiber. Due to the presence of these fibers, sesame seeds are harder to digest, as fibers are indigestible, and thus they slow down your body’s digestion, which keeps you filled for a long time and might promote weight loss by preventing you from over-eating.

However, if a large quantity of dietary fiber is consumed, it would have an adverse effect, as more of it would get stored in your stomach without getting digested and might cause you to gain weight.

Sesame seeds must be taken with precautions, and it is advised that people suffering from gout must avoid it completely, as sesame seeds contain a natural compound called oxalates, which aids in aggravating the symptoms of gout.

Wilson’s disease is an inherited disorder in which copper gets accumulated in various body organs, which might sometimes become fatal. Thus, due to the high copper content of sesame seeds, it is advised to completely avoid eating them if you are suffering from Wilson’s disease.

What Should Be Your Average Sesame Seed Consumption Per Day?

It is quite important to regulate your consumption of sesame seeds. In other words, the regulation helps by increasing the efficiency of its workings on our health and prevents side-effects from appearing.

However, to accurately pinpoint the quantity of sesame seeds appropriate for your daily consumption is quite difficult, as it depends on various factors such as your age, body structure, and activity levels. But, it must be between 40-50g daily, and in just weeks, you’ll start to feel different.

We reviewed multiple sesame oil brands in India to find out the best.

Even if the side-effects associated with an unregulated consumption of sesame seeds are significant, it is important to know that most of those would not present themselves if your consumption is managed properly and moderated.

Done right, sesame seeds can actually prove to be amongst the healthiest ingredients in your diet.

Here, we have answered a few interesting questions about the side effects of sesame seeds.

1. What happens if we eat sesame seeds daily?

Sesame seed in an adequate quantity is good for health. Excess intake can cause moderate-to-severe side effects.

Daily intake of around 40 grams of sesame seed is recommended.

2. Can sesame seeds cause stomach problems?

3. Can sesame seeds cause an allergic reaction?

It is advised that people suffering from gout must avoid consumption of sesame seeds completely.

4. How do you know if you are allergic to sesame seeds?

On the intake of sesame seeds, if you encounter itchy skin, diarrhea, vomiting or cramps, these are the signs of allergic to sesame seeds.