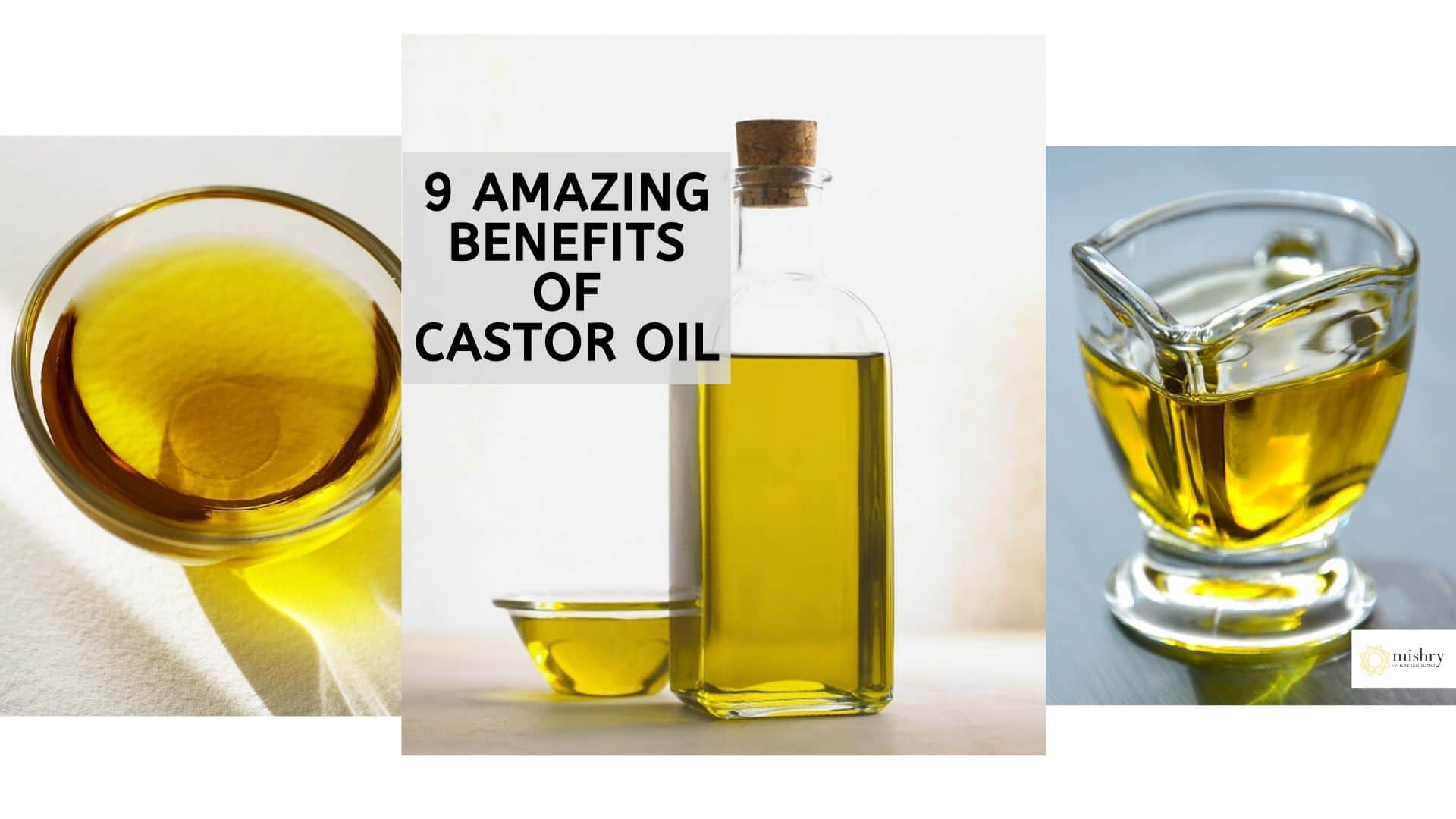 Benefits & Side Effects of Castor Oil: From being used for managing indigestion to acting as a remedy for an eye infection, let’s take a closer look and discuss the healthy benefits as well as side-effects of castor oil.

Castor Oil is a pale yellow, thick liquid that is used in the form of an ingredient for soaps, hydraulics, lubricants, and perfumes. However, irrespective of its highly strong and pungent smell, castor oil and its medicinal aspects, which contribute to the betterment of one’s health and beauty, further strengthens its claim as a phenomenal pain-reliever. But, castor oil is not an exception. Anything that is heavily used, bounds to be harmful. Here’s a sneak peek of castor oil benefits for hair, skin and health.

Benefits Of Castor Oil For Hair

While there is no popular research that says castor oil treats dandruff, but it’s the anti-fungal, and anti-bacterial properties of castor oil, that make it an amazing solution to your itchy scalp and overcoming dandruff problem. Moreover, it is the ricinoleic acid that is said to balance the pH levels of the scalp, further keeping it healthy. Overall, contributing to healthy hair.

The ricinoleic acid in castor tends to increase blood circulation on your scalp. This results in improving hair follicle and scalp health, further reducing hair fall. This acid combined with omega-3 and omega-6 fatty acids, helps restoring your hair health.

The oil penetrates well in your follicles and keeps the hair soft and helps them retain moisture.

Sun can damage your hair and cause dryness, loss of color and lustre. Castor oil, in turn, helps retain your hair quality, and replenishes your scalp from the damage caused by the chemicals in hair products. The use of castor oil brings back the lost shine of the hair.

How To Use Castor Oil For Hair Growth?

Hair growth is a slow and steady process; it is important take care of your tresses. One of the best ways to help your hair grow longer is castor oil. Castor oil has ricinoleic acid that is said to lock the moisture and promote a healthy and clean scalp, which further encourages your hair to grow.

How Often Can You Use Castor Oil For Hair?

It is important to note that castor oil should not be applied more than twice or thrice a week. Applying it every day could be harmful to your hair. You could use shampoos and conditioners that contain castor oil as one of the important ingredients. Castor oil is generally sticky and quite thick, which can be a tough task for you to remove on a daily basis. So, best is to apply it not more than 2-3 times a week.

Here are some hair masks that can be made using castor oil for improving hair health.

Aloe vera helps provide nourishment and locks moisture to keep your hair healthy and shiny. All you need to do is to mix aloe vera gel and castor oil in the ratio 1:1. Now apply on your scalp and massage firmly. Once you have applied the mixture on your hair and scalp, wrap a towel dunked in lukewarm water for at least 30-40 minutes. Wash it off with a gentle shampoo and conditioner.

One of the best oils is coconut oil for hair, which is said to moisturize your hair and scalp, keeping them away from dandruff, further encouraging healthy and thick hair. Mix coconut oil and castor oil in equal quantities, and rub the mixture on your scalp and hair. Leave it for 30 minutes before washing it with a gentle shampoo.

Hair can become lifeless and dull, thanks to the pollution in the environment. However, an almond oil and castor oil hair mask can do wonders and repair your hair like no other. Take about 5-6 tablespoons of castor oil and 2-3 tablespoons of almond oil. Mix them well and apply them to your scalp. Make sure to massage your hair roots and hair tips well. Leave it overnight and wash the next day.

Castor oil is often referred to as a short-term natural remedy for indigestion problems and is a chief adversary to constipation. The main cause behind constipation is the lack of bowel movements, or it is not moving as often as it should. However, oral ingestion of castor oil acts as a laxative, which means that the castor oil helps proper bowel movement, thus allowing the stool to pass through the intestine and helping in getting rid of the undigested waste.

External application of castor oil over the skin surface is known to help the skin retain its moisture. Moreover, it forms a thin layer over the skin, which is responsible for absorbing the moisture from the atmosphere and directing it towards the skin cells, further proving to be a natural skin moisturizer.

3. A Remedy For Eye Infections

Thanks to its anti-bacterial properties, the application of castor oil in order to prevent or diminish the effects of eye infection is quite an effective way. Infections such as styes are believed to be managed using castor oil; all that needs to be done is to apply a few drops of castor oil, two times a day, over the infected region.

Even though this remedy is believed to be quite popular, we do not recommend trying this unless you have the go-ahead from a qualified eye doctor. Eyes are amongst the most delicate organs and putting anything inside, or on the eyelids must be done only after a doctor’s approval. Please don’t try anything like this till you have done that.

Ricinoleic acid, which is also one of the main components of castor oil, is known for promoting the circulation of blood in a rather smooth way. It also helps in the decongestion of the lymphatic system (which is used for the removal of waste from the tissues). The lymphatic system does not work properly in the body of a person suffering from arthritis, thus the tissues start to swell, causing joint pains. However, rubbing castor oil over the swollen joints can help improve blood circulation and a significant amount of pain relief.

Application and massaging of castor oil over the skin surface is quite beneficial thanks to its anti-microbial properties, you can kiss goodbye to acne. Thoroughly massaging castor oil forms a protective film over the skin, preventing any external bacteria from attacking it and causing inflammation.

As mentioned before, the external application of castor oil simulates a smooth flow of blood; similarly, when applied on the scalp, it nourishes and unblocks the follicles, further resulting in healthy growth of hair. Castor oil can promote hair growth when used as directed.

So, if you are moving ahead and thinking of using castor oil on a daily basis, just make sure to check up with your doctor first. The effects of castor oil heavily depend on the consumer’s health history. And make sure to stay away from ricin (the toxic chemical found in castor oil). Also, there are no studies that approve of castor oil’s benefits for hair growth. (1)

1. Where is castor oil derived from?

Castor oil is made by extracting oil from the castor beans. It is extracted by pressing the beans into a versatile, pale-yellow vegetable oil with a very distinct flavor and smell. Castor oil is known to contain a toxic enzyme called ricin. However, the heating process that castor oil undergoes deactivates it, allowing the oil to be used safely.

2. What is the shelf life of castor oil?

Like most oils, castor oil also has an expiry. It goes bad when it becomes cloudy and dark brown, and if you notice an unpleasant smell, then the oil has gone bad. This happens due to various factors like exposure to air, the temperature at which it has been stored, and exposure to light. Cold-pressed castor oil has a shelf life of about 5 years, and normal castor oil has an expiry date of 1 year.

3. What is the best way to store castor oil?

Here are some tips for storing castor oil:

1. Too hot or too cold temperature is not ideal for storing castor oil. The ideal temperature for keeping the castor oil is between 12-25 degrees celsius. Moisture and oil can’t stay together, so make sure that the place where you are keeping the bottle is dry.

2. The more you expose the bottle to air and light, the quicker the oil will expire. Therefore, seal it tightly after using it to protect the oil from oxidation.

3. Direct sunlight makes castor oil stale fast. Make sure that the oil is kept away from sunlight. Keep the bottle away from windows and other lit areas.

4. Storing castor oil in the right location is the best way to increase its shelf life. However, some people keep it in the refrigerator after adding a bit of vitamin E oil.